Until last month, if asked, I would have said that I didn’t really like prunes. I couldn’t remember when I had last tried them, but I had sub-consciously locked them away in a ‘boring dried fruit’ filing cabinet in my head, alongside figs, dates and those dubious mixtures that sit next to the till at service stations getting dusty. That was until I was persuaded to try one at a recent festival. I was told by the friendly woman on the California Prune stall that they are a good, healthy substitute for chocolate when you are having sweet cravings. As a staunch chocoholic I was going to take some convincing – I think may even have rolled my eyes and reluctantly popped a prune in my mouth to show willing.

It was – as promised – delicious. I am now a convert and do in fact eat a prune or two after lunch to quell my chocolate cravings. I was of course told that California Prunes are the best kind – that was why that little gem of fruity, soft, rich goodness was so yummy. I am yet to taste a non-Californian Prune so I cannot endorse their superiority.

I was also given a recipe booklet with some very interesting culinary uses for the humble, dried fruit. The below recipe is a variation on one I spotted in there. I was missing a few of the ingredients and am all for being creative in the kitchen so I kind of made it up.

My additions were the roasted garlic and the cucumber. I would never have considered using the latter until a couple of months ago either. I went to Cuba on my honeymoon and found the Cubans grill and BBQ cucumber – it works well in this dish as it adds freshness to the otherwise rich favours – the caramelised sweetness of the garlic and prunes, and the and saltiness of the halloumi.

Makes 8 skewers – perfect as a veggie main course for 4 people, or side dish or starter for 8

Chop more mint to sprinkle on top. Serve with salad as a starter, or for a veggie main course add rice, home-made potato wedges or potato salad.

I made this for a food-sharing event at the Earl Ferrers pub on Global Sharing Day and it seemed to go down pretty well. I hope you enjoy it! 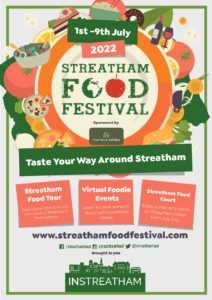